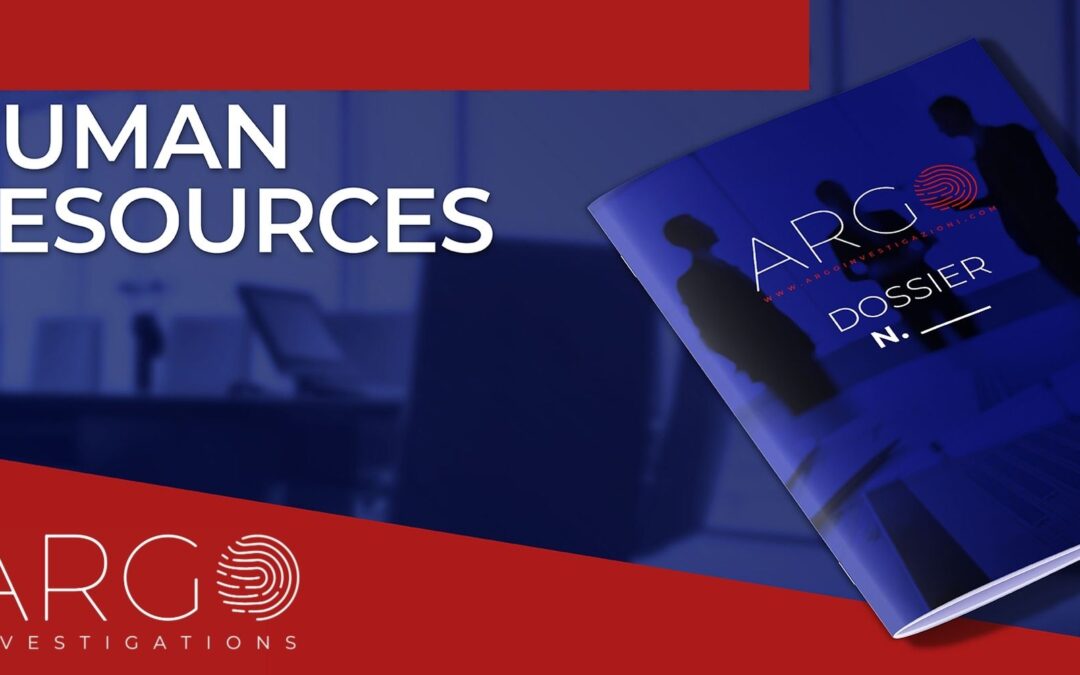 Among the various areas in which private investigation finds its space for action, one of the most relevant is certainly the world of work.

The investigative action carried out in this sector is part of both the dynamics that characterize the relationships between competing companies, and the relationships that bind the entrepreneur to his employees.

In the latter case, the investigation is aimed at ascertaining the compliance of the behavior held by the worker with the obligations imposed on him by law in the execution of the employment contract and, therefore, loyalty, diligence, obedience, fairness and good faith. It is not enough, in fact, for the worker to perform his service correctly, as it is rather necessary for him to refrain from carrying out “unfaithful” conduct towards the entrepreneur and the company.

For this reason, in most cases, the employer’s interest is to verify whether the worker is taking advantage of the privileges and rights that are recognized by law as, where abuses by the employee, the employer could certainly dismiss him for just cause.

In essence, early termination implies the fulfillment of a serious fact that would undermine the relationship of trust between employer and employee.

How can you ascertain any abuse committed by the employee?

Unless you are lucky enough to receive information from a confidential source which, in any case, would remain undocumentable, the only way to discover an incorrect behavior of the worker is to appoint an investigative agency equipped with all the means to ascertain and document his unfaithful conduct.

It is important to remember that the entrepreneur will need documentation proving the abusive behavior of the employee by virtue of which, not only will he be able to freely dismiss him but will also be able to face a possible subsequent judgment in the event of an appeal against the dismissal by the worker.

This documentation can be used in the process only if legitimately formed and collected by authorized figures such as private investigators.

What are the abuses that legitimize the entrepreneur to dismiss the employee for just cause?

In employment relationships, the phenomenon of absenteeism is widespread, understood as the prolonged absence of the employee from the workplace. This absence can be legitimate, therefore supported by suitable and real justification linked to health, personal or family reasons, or illegitimate. The law grants the worker a wide range of rights that allow him to legitimately be absent from the workplace but, very often, it can happen that the employee abuses it, thus committing an offense. For this reason, the employer is entitled to monitor the employee’s conduct and, in the event that an abuse is found, he can take disciplinary measures up to and including dismissal.

The phenomenon of absenteeism can manifest itself in the following ways:

False Sick Leave: a case in point of illegitimate absence from the workplace occurs in the case of fraudulent simulation of illness, i.e. when the worker presents to the employer one or more medical certificates certifying his inability to work, actually simulating it to remain absent and perhaps carry out other work activities for oneself or on behalf of third parties, thus materializing the phenomenon of the so-called “double work”. This occurrence characterizes the behavior of the worker as failing to comply with the duties of fidelity and diligence required in the performance of one’s obligation and, more generally, with the principles of correctness and good faith in force in contractual relationships. Therefore, the employer who has a suspicion about the veracity of the disease attested by the employee, can legitimately contact an investigative agency for the assessment. This is what was established by the Supreme Court in a recent ruling in which the investigative control aimed at verifying the employee’s illness or the lack of a situation suitable to reduce their working capacity was considered lawful. It follows, therefore, that the employer is always precluded from a health assessment but, on the contrary, is allowed to verify the verifiability of the disease certified by the employee or, in any case, his inability to determine a significant inability to work.

Abuse of parental leave: These will be awarded an allowance for the period of leave granted which must be dedicated exclusively to activities in favor of the child. In reality, there are many cases in which working parents, aware of the right recognized to them by law, make use of these permits by dedicating themselves to different activities, thus constituting an abuse of parental leave.

Abuse in the use of union permits: another form of absenteeism is constituted by the abuse of union permits granted both to workers for proselytizing activities and to union representatives to perform the functions related to their mandate.

In addition to the phenomenon of absenteeism, the employee could also engage in other behaviors contrary to their duties, capable of damaging the contractual relationship in place.

Among these, there are some that can often be found in the practice that characterizes the employment relationship.

Thefts in the company: even apart from the ascertainment of the criminal responsibility of the worker caught stealing assets from the company, such behavior can certainly be subject to immediate dismissal even if it is done on assets of modest economic consistency. What is highlighted, in fact, is not so much the pecuniary damage caused to the employer, but the intrinsic disvalue of the worker’s conduct, certainly capable of compromising the trust placed in him.

Unfair competition: acts of unfair competition with the aim of imposing rules of correctness and loyalty on companies operating in the market so that no one, in the dissemination of their products, benefits by using methods contrary to commercial ethics. It should be noted that unfair competition must consist in activities aimed at the illegitimate appropriation of the market space or the customers of a competing company that lead to confusion of the signs produced, a dissemination of news and appreciation on the competitor’s products or activities or in any case in acts that do not comply with professional correctness. The offense, therefore, cannot derive from commercial damage in itself, nor from the fact that an individual conduct of the market produces a decrease in business in the competitor. This is because competition in general makes selfish conduct legitimate, that is, directed towards the pursuit of greater business carried out according to legal rules.

Violation of the non-competition agreement: this is a legal instrument placed as a guarantee for the employer against conduct that can cause the leakage of company know-how once the relationship with one of its employees is interrupted.

Aliunde perceptum: this expression literally means “perceived elsewhere or by another person”. The aliunde perceptum comes into relief when a dismissed worker challenges the dismissal, also asking for compensation for damages but, pending the proceedings, carries out another work activity which, obviously, provides him with earnings. In such cases, if the employer can prove that his former employee has found a new job, from which he receives income, he can ask the judge to deduct the amount received elsewhere from the sum eventually paid as compensation for damage. In fact, it is up to the employer to prove that the dismissed worker has received or could have received sums of money, as confirmed by the jurisprudence also in a recent sentence in which it stated that “the burden of proof relating to the aliunde perceptum and the aliunde percipiendum is the responsibility of the employer, provided that the circumstance that the unjustly dismissed worker has, pending judgment, worked and in any case received an income represents an impediment to the claimant claimant and must consequently be proven by the person who objects , not by those who claim compensation.

Open Source Intelligence (OSInt): it can often happen that an employee, using the various social networks available, carries out actions that are harmful to the company where he works, for example using expressions of contempt or insulting and defamatory towards his employer of work or colleagues. The activity of O.S.I.N.T, through the collection of information from publicly accessible sources, makes it possible to identify any reprehensible conduct of the employee implemented with the use of the internet.

It should be noted that such an activity is not limited to a mere search on the web but must be carried out by expert personnel capable of sifting through the relevant and reliable sources, selecting and collecting them through specific software.

From the examination of the possible behaviors that can be implemented by the employee to the detriment of the company, it is clear how important it is for the entrepreneur to use an investigative agency to rely on for the control of any abusive conduct.

Argo, an investigative agency with offices in London, Rome, Milan, thanks to its consolidated experience in the sector and its team of experts, is able to provide complete assistance to companies in all the areas listed above.

Upon completion of the investigation, the customer will be given a detailed report containing all the activities carried out, also accompanied by documentary evidence that can be used in the process.